I have a kitten coming, granted it won’t be here until the middle of February, because he is too young, but he will be coming.

I have officially called him Tathar Silver Leaf, unofficially we will see when he gets here.

He is a Lilac Point Siamese, and right now he looks like this. 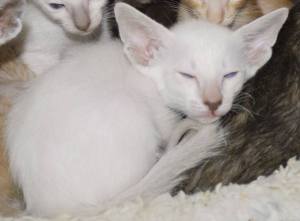 The other news on that front is that there could be another coming sooner, a Seal Point Siamese. No, she hasn’t gotten a name yet, I just found out about her, and she has a LONG way to travel to get here.

The breeder says she desperately is seeking for someone to love her.

They say they immediately thought of me. This is what she looks like…

So, as some may, or may not have noticed, I have the synopsis up on Goodreads for ‘Surrounded by the Light’.

This will be the last Elven Christmas release.

Sorry, but the children are about to move on into “Tratchars’ as they age.

I am hoping to have the synopsis for ‘Integration’ up over the weekend.

I am also hoping to get back into writing the later in January,

after the holidays are over.

Christmas is getting closer,

and the weather has warmed up.

You know what that means, yes,

it is melting a little, and the roads are getting slick.

Despite all the hoopla of the holiday season I have managed to get things done, mostly due to circumstances.

Where do I start?

Well, lets say the house has been cleaned AGAIN, this time because of necessity… yes, I had a mouse problem.

Poor Snoop was too sick at the end to take care of things and the door had been left open too much.

I got rid of the problem though…knock on wood.

There isn’t a drawer, closet, dresser, cabinet, opening, floor that hasn’t been gone through in the entire house.

I hate mices to pieces, as the cartoon used to put it.

I only have 1 Christmas gift to get, that I can think of…and that I will order this afternoon, or Monday at the latest.

I did get delivery on the books.

I have them all personalized, signed, and sealed in their appropriate boxes.

They are awaiting rides to their final destination.

4 of the boxes are fairly large,

the rest not so bad…Should I mention that is the US orders?

The Canadian orders are simpler.

One is large, the rest a lot smaller, but still 3 books do weigh up.

Snoop would have loved the boxes,

they would have done double service as scratching posts for him.

A Christmas bonus in his mind I am sure.

There is little else to say, I hope everyone is having a wonderful Christmas season and not overdoing the shopping like I did.

Ah well, my little Elves deserve it, they tend to work even when they aren’t feeling that well.

Until next week…have a good one…Just remembered, next weekend is the last before Christmas…

I am not going to be ready..

.well I am, but not internally.

6 thoughts on “It is a beginning”