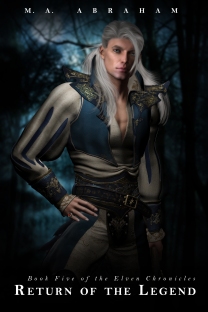 The Elven world is evolving and Daroth is set to guide in a new era, but not as King of the Empire.  With the Grey Elven King Ingwër, the Crown Prince Elrohir of the High Elven Kingdom, and King Garoldth at his side they are set to recall the Counsel of the Elves.  It is a new beginning for their world and they have every intention of reclaiming the glory the Elven Empire had once enjoyed.  Can they do it without the knowledge and talents their people once took for granted?  Will the fates smile on the Empire and grant them their fondest wishes?

As Kingdoms begin to come together and they begin to rebuild the world as it was known before the wars the Empire reforms.  New Life Mates are brought to light and the Elves begin to question how much has been lost through the millenniums and since the time of the ancients.  There is no one who can answer the questions forming in their minds.  The library of the ancients, which could give them all the information they need, has been lost and with it the knowledge it holds.  Or is it?

A random discovery made in a pile of scrolls.  Choices with unforeseen ramifications acted on in haste.  It all comes to a head as the Elven world evolves, and a message from the past is carried from Garoldth’s Kingdom into the Elven Empire.  It brings the words of an ancient warrior to the attention of the Kings who would rule the Empire.  It is a missive from one Warrior King to another.  There is no questioning whom the message is from.   Only one held the name written within the scroll, and he was King of the Empire when the ancients were at the pinnacle of their power.  A King meant to rule over Kings.  In the history of the Elven people his name was and still is legend.

2 thoughts on “Return of the Legend”